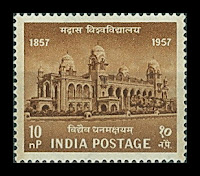 Indian Posts and Telegraphs issued 3 stamps on 31.12.1957 in the denomination of 10 naye paise each to celebrate the Centenary of founding these great institutions in the country. Each stamp conveys a message in Sanskrit. "तमसो मा ज्योतिर्गमय" (tamaso mā jyotir gamaya") as quoted in other blog articles is from the Bṛhadāraṇyaka-Upaniṣad. "विद्यैव धनमक्षयम्" (vidyaiva dhanam-akṣayam - Education is imperishable wealth)" is a common adage. 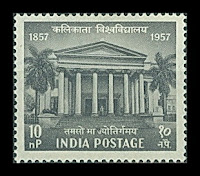 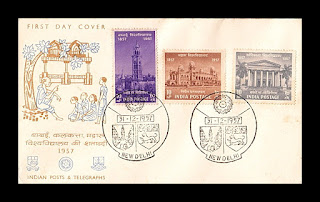 Posted by Ramanathan PS at 10:05 AM No comments: 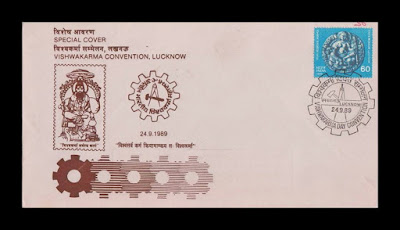 A special cover was released on the occasion of the Vishwakarma Convention held in Lucknow on 24.09.1989. The cover features the portrait of Viśvakarma, the architect of the universe with inscriptions in Sanskrit.

In the insignia there is the AUM, the monosyllable representing the Supreme Reality. There is one more inscription in Sanskrit on the cover which is mis-spelt --

Posted by Ramanathan PS at 2:03 AM No comments:


20 million pilgrims took holy dip at Ganga on January 30 at the "Half-mela" (at six-year interval) at Allahabad. 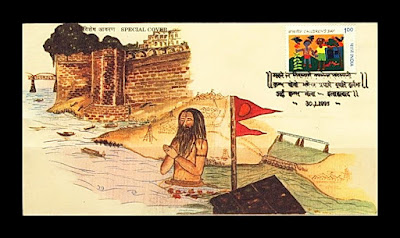 A special cover was brought out on 30.01.1995 by the India Post to commemorate the Ardha Kumbha Mela. The Cancellation carried a Sanskrit verse, but not visible. 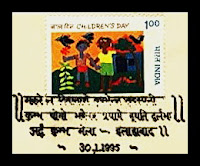 Readers, please help get a cover for me.
Posted by Ramanathan PS at 5:32 AM No comments: 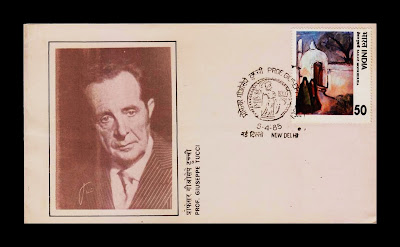 Giuseppe Tucci (5 June 1894 – 5 April 1984) was an Italian scholar of oriental cultures, specialising in Tibet and history of Buddhism. During its zenith, Tucci was a supporter of Italian Fascism, and he used idealized portrayals of Asian traditions to support Italian ideological campaigns. Tucci was fluent in several European languages, Sanskrit, Bengali, Pali, Prakrit, Chinese and Tibetan and he taught at the University of Rome La Sapienza until his death. (Courtesy: Wp)
Tucci died in San Polo dei Cavalieri, near Rome, in 1984.

His contributions to Sanskrit are mainly translations of Buddhist tantras.


In 1961 Viśva-Bhārati conferred on him the Deśikottama, its highest award.


India Post released a special cover with a postmark to commemorate Tucci on 05.04.1985 for his contributions to Indology and Sanskrit.

Posted by Ramanathan PS at 2:40 AM No comments:

Though remembered as a pioneer in Nepali literature, he has to his credit a couple of translated works; out of which one is the Śākuntala of Kāḷidāsa. This was done at the request of the then King of Nepal. The other one is the Priyadarśikā Nāṭikā of Ṣrīharṣa.

A stamp with an FDC and brochure was released by Nepal Post in the year 1962 to honour Motīram Bhaṭṭa. 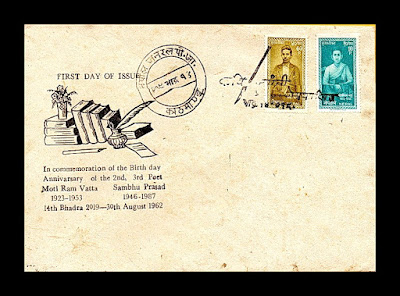 
Posted by Ramanathan PS at 8:34 AM No comments:

Bhānubhakta Ācārya (1814-1868) was a Nepalese poet who translated the great epic Śrīmad-Rāmāyaṇa from Sanskrit to Nepali language. Born in Tanahu, he was educated at home with a strong leaning towards Sanskrit language and religion. His version of the Ramayana is the best loved one even in modern Nepal. 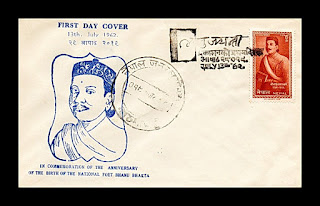 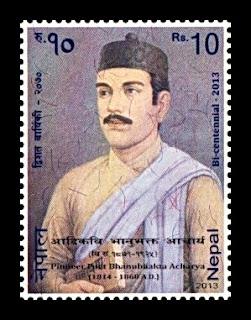 On 31.12.2013, a second stamp was issued. On this and the and the FDC his name is seen prefixed with the title "Ādikavi" which will not make any sense to Sanskritists. Ādikavi is Vālmīki and Vālmīki alone can hold the title. Ādikavi means the "first poet" and the first śloka was "mā niṣāda ..... ". Probably he was considered as the first poet of Nepal. 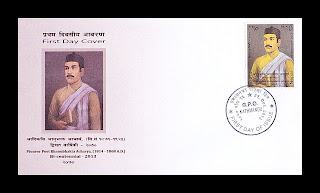 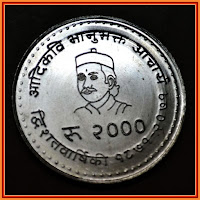 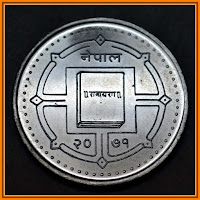 Though not relevant on this page, I add a piece of numismatic information -- A coin to commemorate the pioneer poiet Bhanubhakta Acharya was released on 14th July, 2015. The mintage was only 1000 pieces in fine silver, the size being 37 mm and the weight 25 gm, in the denomination of Nepal Rs.2000. 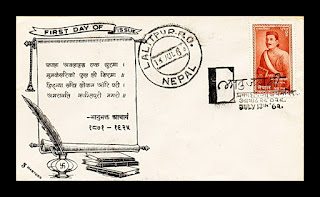 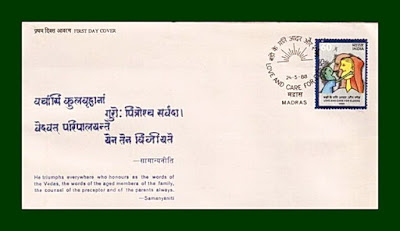 India Post issued a special stamp to highlight the necessity for taking care of elders with love, on 24.5.1988. The FDC issued on the occasion carried a Sanskrit verse from the Sāmānya-nīti which runs as under:

Posted by Ramanathan PS at 1:48 AM No comments:

Saṃskṛtam (spoken as "Sanskrit" in English) is an ancient and classical language of India. The Indian tradition calls it “daivī vāk” (Divine Speech) and “deva-vāṇī” (Language of the Gods). The divinely revealed Vedas are composed in ancient Sanskrit. Later languages and literature of India find a source in Sanskrit. The beauty of this exquisite language is in its precision. The word “Saṃskŗtam” means "refined or well done." The alphabet in Sanskrit is written in a script called Nāgarī or Deva-nāgarī. It is perfectly designed and suited for phonetics. Sanskrit shares its script with Hindi, India's national language.

Pāṇini’s Vyākaraṇa (Grammar) is described as one of the greatest productions of the human mind. The flavor and fragrance of this rich language is reflected in the major epics, the Rāmāyaṇa (Vālmīkī), the Mahābhārata (Vyāsa), the Purāṇas and the Upapurāṇas. The great poets of classical age immortalized this language through their Kāvyas (Prose and Poetry), Nāṭakas (Drama) and Campus (Mixture of Prose and Poetry). The treatises on all branches of learning were written in Sanskrit -- Vedāṅgas (Auxiliaries to the Vedas), Darśana (Philosophy), Āyurveda (Medicine), Gaṇita (Mathematics), Vāstuśāstra (Architecture), Saṅgīta (Music) and Nātya (Dance), to name a few.

The word "philately" is the English version of the French word "philatélie", coined by Georges Herpin in 1864. It is the study of postage stamps and postal history and other related items. A wide range of popular subjects are depicted on postage stamps which have contributed to the origin of collecting of stamps by the theme. It can be a great joy especially for those who have a real interest in the theme that they are collecting. It enhances one’s knowledge about the subject too. Generally, thematic collection is not bound by any rules. The choice is with the collector.

The theme I have selected for this Blog is – Sanskrit and Philately – on which topic I wish to focus my attention, the reason being its link with my learning and active interest in that marvellous language -- Sanskrit plus Philately.

Here, nothing is MINE. All the information is gathered around from brochures, books and the Internet. My sincere thanks are due to everyone for their contribution.

I have 99% of the materials exhibited here. Might have a few extras which I wish to dispose of and utilize the funds to propagate Sanskrit. Seriously interested philatelic friends can contact me by sending a mail. 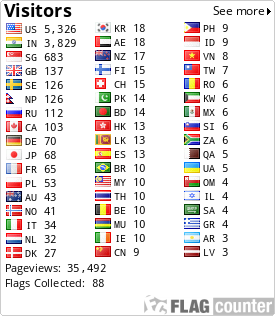